Brainstorming is widely used in the early stages of writing. Many different activities would qualify as ‘brainstorming’, for instance, talking to colleagues, making memory inventories, and creating various kinds of lists of material. Mind mapping, however, is often overlooked as a useful element of brainstorming. When a list is compiled, it is often hierarchical in the sense that the first thing on the list is often considered most important. Mind mapping, on the other hand, is more dynamic and allows the writer to see a larger picture of the material that might be used in the text and the various connections between different areas of the text.

A mind map of a text about the writing process might look something like this, in a simplified version: 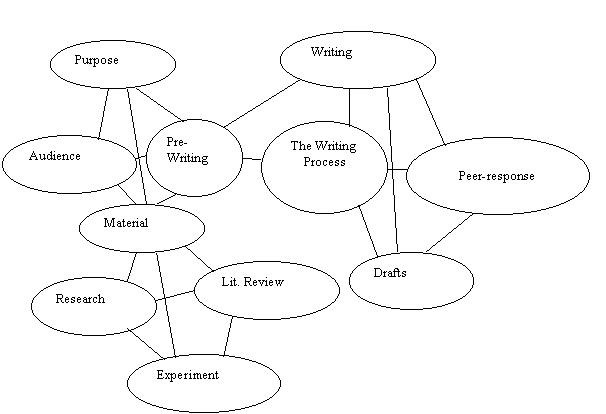 Keep in mind that mind mapping is very individual and that some writers do not use mind mapping at all, whereas others would not be able to organise their texts without them. The most striking difference between mind mapping and various lists and inventories is that mind mapping tends to visualise the parts of the text in a more flexible way and that a mind map often results in new links and connections. Another advantage of mind maps is that you can always add further detail, yet still retain a useful, visual perspective

Another useful strategy in selecting and organising material is the use of some kind of card system to categorise information.  This system is named because, before the rise of personal computing, writers would use separate index cards to write down each of their points. Writers could then easily change the order of their points by physically moving the order of the cards. Working in this way can make it easier to separate pieces of information, or, for example, to arrange details according to some kind of classification, such as in order of importance. This kind of ‘card system’ also has the additional advantage of letting you try out different structures for your text in a simple manner. Finally, this ‘card system’ is also easily transformed into your text by simply providing links and explanations that take the reader from one ‘card’ to the next.