This section discusses visual support in general and then looks in more detail at figures, graphs, tables and equations. Most theses contain some kind of visual support to clarify information found in the body of the thesis, in particular in the results section. Visuals play an important role as readers tend to scan them in a report to gain an initial understanding of its quality and relevance. Often the most important findings are presented in the form of visuals such as figures, tables, graphs, and equations . Any visual support should include the following: introduction to the visual, the visual itself, an informative caption and a commentary (see below). Click on ”Figure 2 extreme rainfall events” below to open in a separate tab.

It is important to comment on the visual information, highlighting to your reader what they should notice and why this is important. A data commentary typically contains the following:

The type of information being presented often lends itself to a certain type of visual support. The common types are listed below with examples and tips. The visual support should be placed as close as possible to the commentary in the text.

Figures include most illustrations ranging from photographs and diagrams to line drawings.  Each figure should be individually labelled, either Figure 1, Figure 2 etc or according to the section it is in i.e. Figure 2.1 (the first figure in section 2). The caption should appear below the figure ( see the example above). There are 2 options for labelling figures, ”Figure 1” for the first image, ”figure 2” for the second, etc or number the figure according to its place in the report i.e. Figure 2.1 is the first figure in section 2.

Graphs are useful to illustrate trends or movement of data. The most common types are line graphs and bar charts. With all graphs, take care to label both axes and specify the units used. 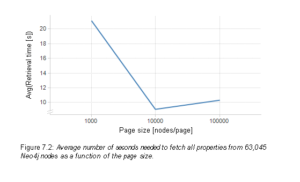 A table is useful when a writer wants to compare several items, and uses the same criteria or categories of comparison for each. It is also useful if the aim is to show detailed information and/ or when comparing both figures and text.

Equations can be presented within running text or displayed on lines by themselves, though the latter is most common. When the equation appears on a line by itself, it is still part of a sentence and should be punctuated accordingly.

An ideal gas law analogy is